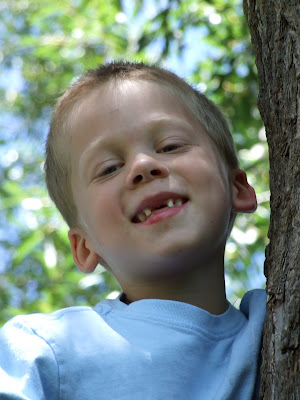 He loves to climb trees.
He's missing his two front teeth.
He loves to read.
His spirit is about 20 years older than his body.
He's the family clown.
He does voice impersonations.
He loves to run fast.
He loves his bike and his scooter.
He loves to make friends and to play with his brothers.
He's a leader.
He loves to eat spinach, asparagus, and mushrooms.
He sings.
He improvises on the piano.
He has an imagination you wouldn't believe.
He likes to be trusted with responsibility.
He is the entertainment for the babies.
He invents lego creations.
He sits for hours and listens to Narnia radio theater.
He will soon be a first-grader.
His current favorite phrase is, "I'm gonna get you!"
He loves his orange crocs.
He also loves crocodiles.
He's my 6-year-old.
And I am incredibly blessed.

Email ThisBlogThis!Share to TwitterShare to FacebookShare to Pinterest
Labels: Sam