Called to be light in darkness.
Commanded to keep our eyes from evil.
Admonished to not fear.
Instructed to teach our children the Way.

Many of you already know how I feel about Halloween, so rather than waste words saying some of the same stuff again, here are my posts from years past.  Please take time to read the comments section on "Hallowed be your name" and look for the one who once lived in extreme darkness but has now chosen light.

As you will find if you read through these posts, I am conflicted in how to handle this time of year in a way which will honor the Savior.  This year, we are choosing to have a family time together - with some extended family who will be visiting.  We will be in the basement.  We will be ignoring the door. Next year may find us doing something different.

Hallowed Be Your Name!

Mom, Why Don't We Go Trick-Or-Treating?

Lately, the two older boys have been getting into chess.  So they set up a table in the garage and played with a young lad from a neighboring kingdom.
Spectators escalate the tension in the room, which could be cut with a knife.
Drinks were a must, to cool parched throats aching with the dust of imminent defeat. 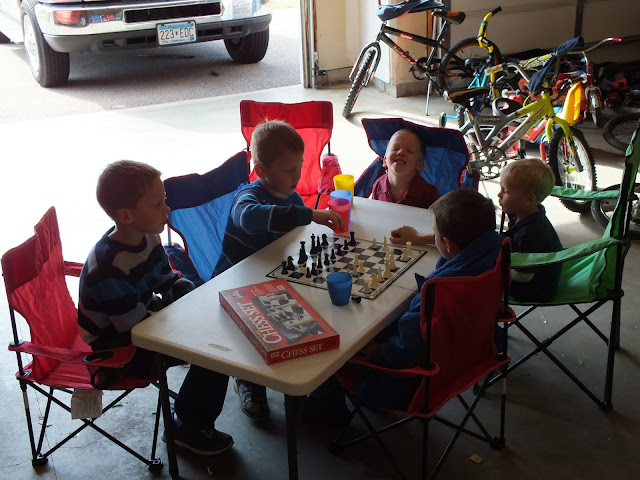 You can't win them all.  Or in some cases, sadly, you just can't win.
Seen above, the opponent comforts the loser with a hand to the shoulder while simultaneously reveling in his win.
Posted by Sarah at 7:30 AM No comments:

It's all fun and games...in my imagination

Things I'm missing out on while traveling without my boys: 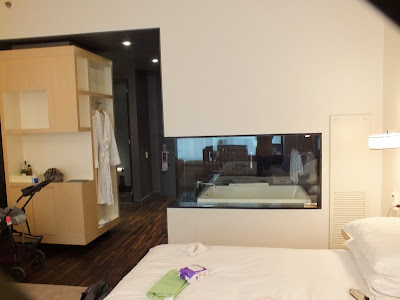 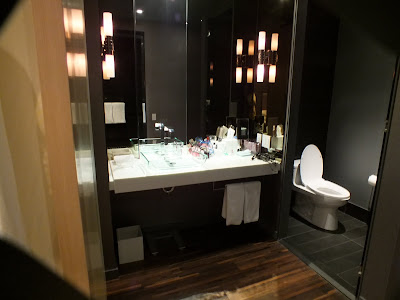 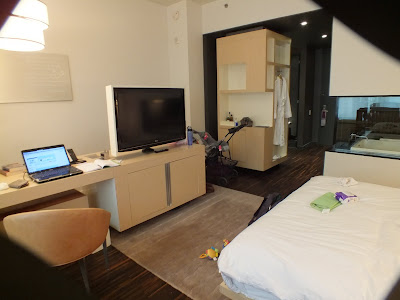 My husband and I are in NYC with our youngest while he works in the home office for a couple of days and I explore the financial district.  We're also here to celebrate our 11th anniversary, which is on Saturday.  Our boys are home with family and friends.  It's delightful.  But I miss my boys!  Thank you for experiencing with me my stress-free, virtual reality of having them here.

It's a girl thing 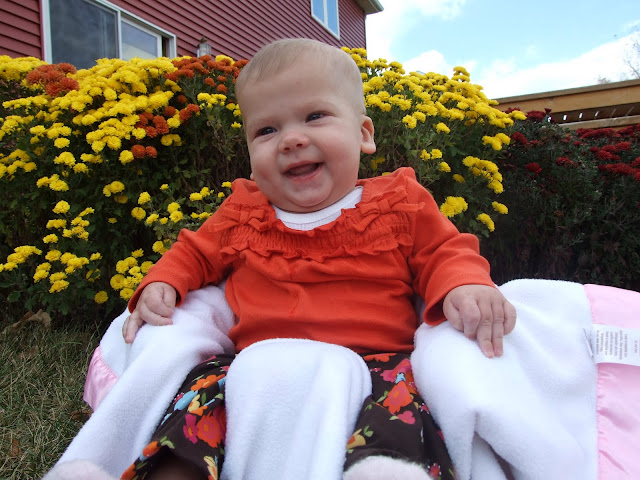 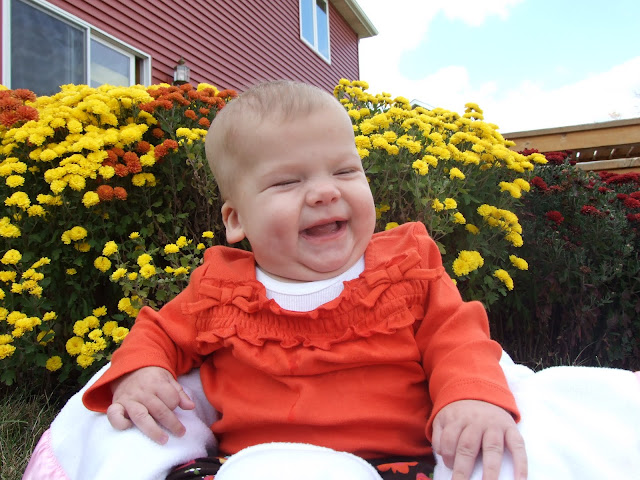 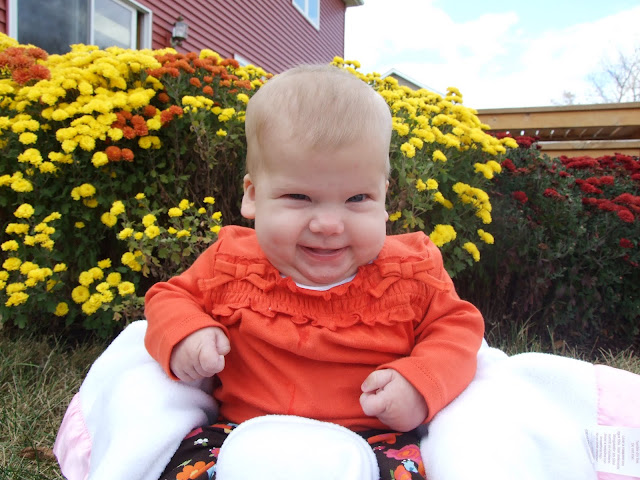 "I could try to grin harder, but I'd pop right out of this bumbo."

I get a lot of questions about what it's like finally having a girl.  I'm honestly still in awe of that fact, but I'm also absolutely reveling in delight!  She adds a sweetness that is already so girly, so refreshing in a houseful of rowdiness.  I'm sure she'll be a part of that rowdiness someday soon, but for now, I'm loving the sweet smiles, the cute little coos and cries, the cuddles, the respite of girlishness where I can dawdle every morning over picking out which darling outfit she'll wear that day or what oversized, slightly obnoxious hairbow perfectly coordinates.  I didn't know how much I was longing for a girl until I had one.  She is my Mercy from the Lord.
Posted by Sarah at 9:36 PM No comments:

A sword in the woods

We have a wonderful spot near our house that is just referred to as "the woods".  My boys have had many an exploit behind our house amongst the trees that are left there after the tornado.  They've attempted constructing an electric fence (a few batteries may have gotten pulverized in the process).  They've formed various clubs.  They've dug for worms and for treasure.  They've made furniture out of logs and leaves.  And they've had interesting conversations with the neighbor kids.  They've discussed the gospel with some.  The identity of Santa with others.  And yes, they are still learning to speak the Truth in love.

Today, they had a conversation about laws.

According to one neighbor, there is a law in our city that says you can't carry a shovel to your hideout.

Sam aptly stated that "there's a law for a lot of crazy things nowadays".  Because sometimes he talks like an eighty-year-old man.

He then told this particular neighbor that in some places, it's even legal for men to marry other men.

He is not aware of the hot debate going on right now for this to be legal in our state.

The neighbor friend said some stuff about how people should be allowed to marry whomever they want and that it really wasn't his business.

The boys told this neighbor that it wasn't about it being or not being their business.  It was about the fact that the Bible says it is wrong.

The neighbor: "Well it doesn't say that in my Bible!"

Caleb then ran to the house asking for a Bible and if Daddy could find him the verses that said this was wrong.

After reading this to the neighbor, the response was, "Oh."

I loved that they went straight to the Word.  They didn't come in and "tattle", asking us what they should do - they grabbed the source of Truth.

I realized that we are now, more than ever, so responsible for equipping our children to wield the Sword of Truth and for encouraging them to speak the Truth boldly.  Not just for the future, when they're older, or when they're challenged in college, but right now.  For those everyday moments out in the woods.

Reading a little further in this passage in Romans, I am reminded about why our family has been called to homeschool.

"Furthermore, since they did not think it worthwhile to retain the knowledge of God, he gave them over to a depraved mind, to do what ought not to be done."  Romans 1:28

His Word still stands as the absolute authority.  The bottom line Truth.  The Sword that cuts through Satan's deceptions.  It is a daily challenge for us as parents to equip our children to retain the knowledge of God, but what a powerful, mighty tool, and one of the best gifts we can give to our children.
Posted by Sarah at 9:16 PM No comments:

In which I use pink text! 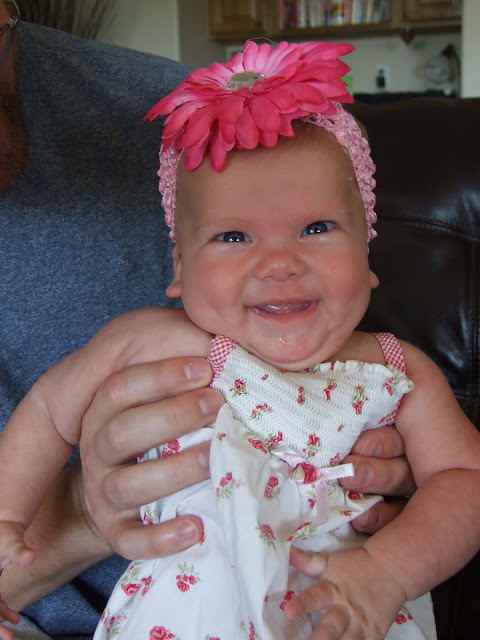 "Not everyone can pull off wearing a gigantic flower on their head.
Here's a perfect example - see, Daddy would never be able to wear something like this and be so cute, so he wisely chose the natural look.  I went for the flower.  Yep, you don't have to tell me I look cute." 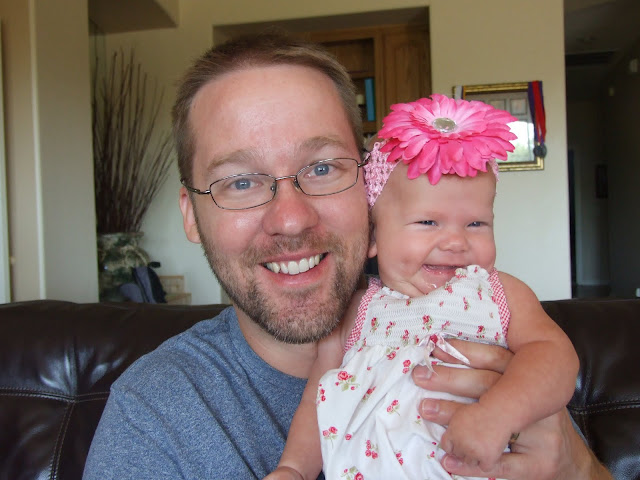 When you homeschool, you get to start school whenever you want!  So we waited till Oct. 1, due to the fact that we were traveling.  Wait, actually, the boys did their "swimming unit" in Arizona, so I guess we officially started then!
Just for fun, here are some first-day-of-school shots.  Apparently, it was the brightest day ever!
*Grades listed do not necessarily reflect the true level of knowledge each one is capable of. 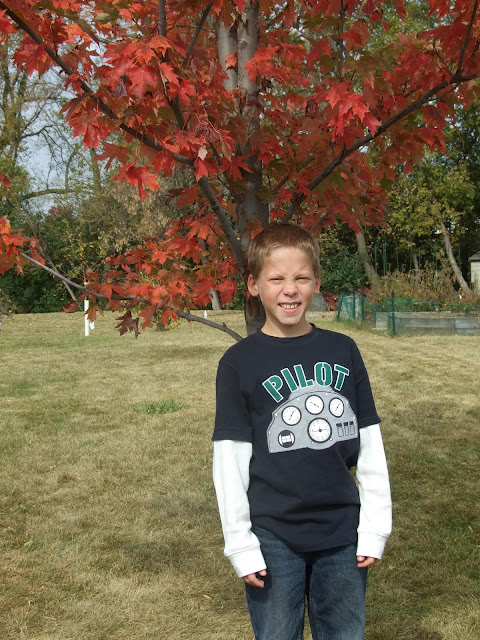 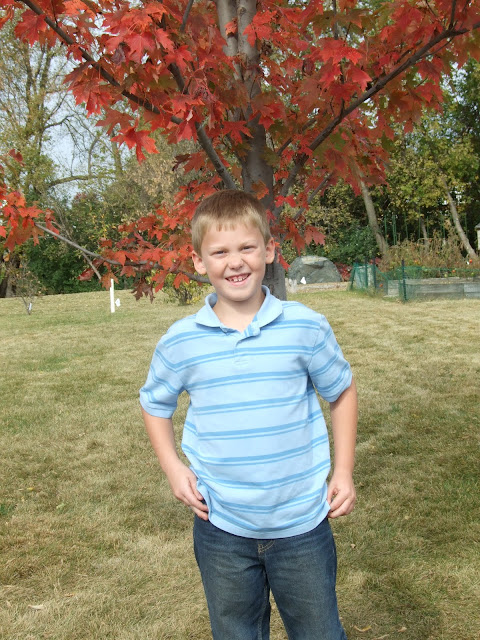 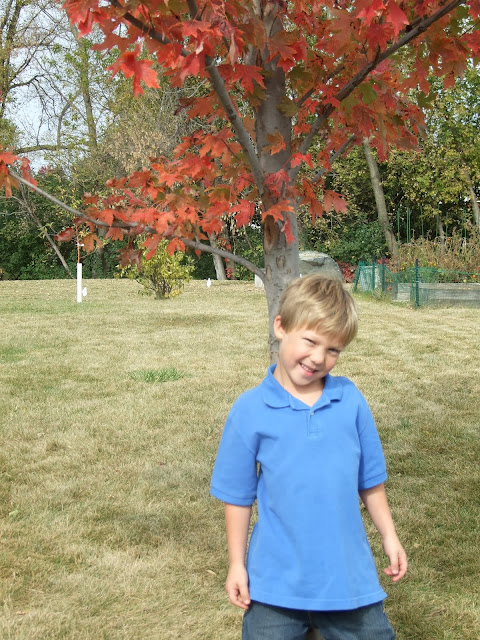 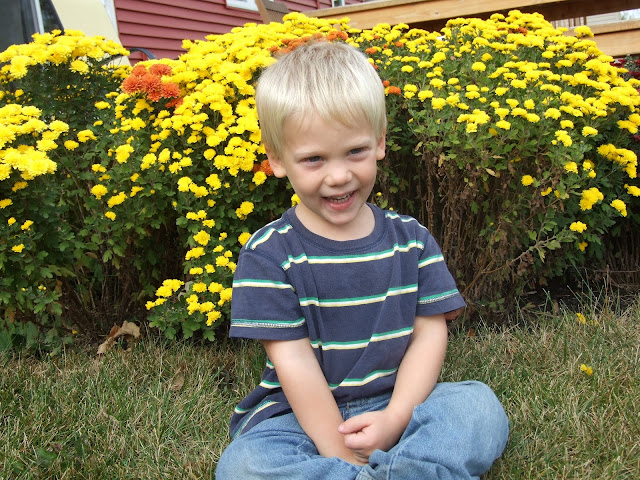 Josiah - Preschool (3 yrs) (side note: this is his I'm-trying-not-to-smile face) 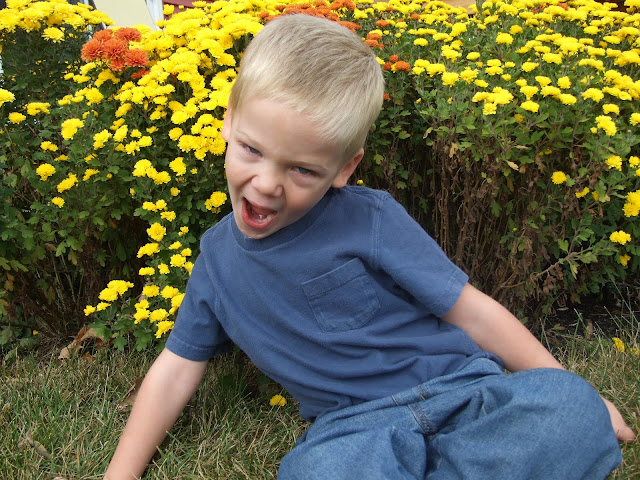 If they ever do a recording together, this is what they should use for the front of the CD 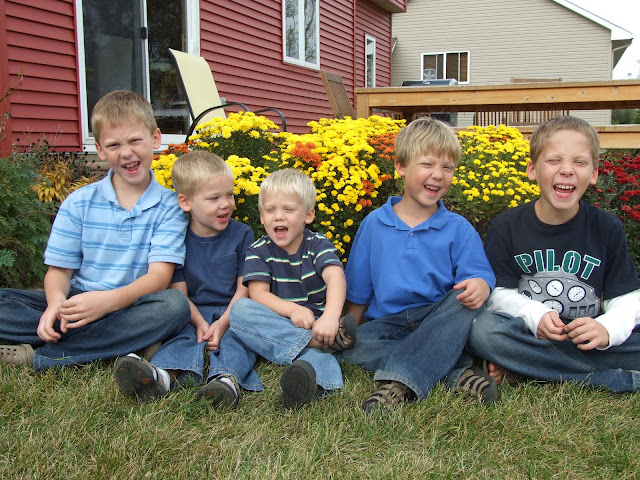 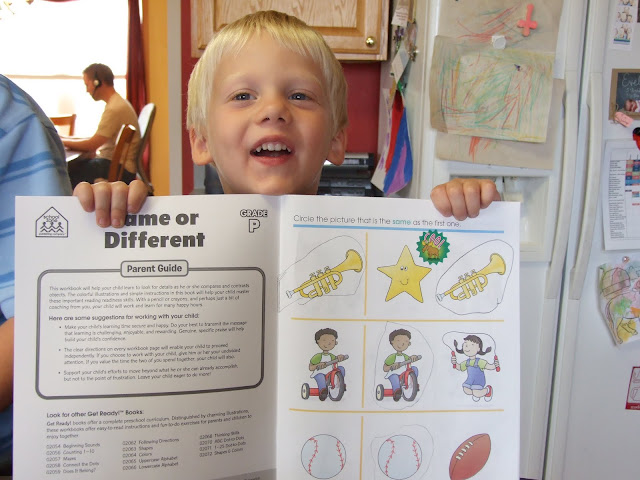 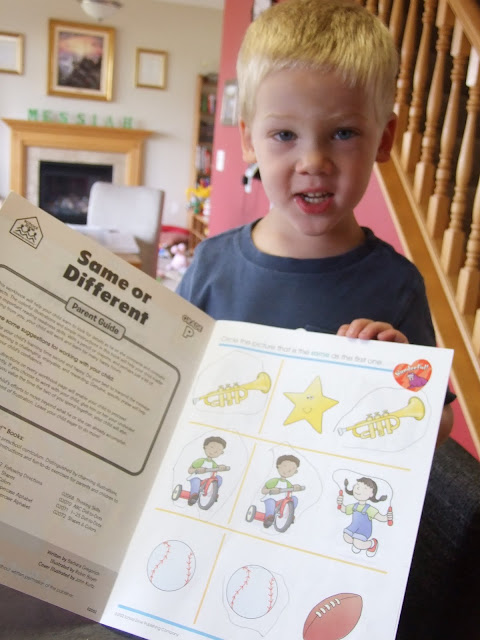 *In case you need help here, if our 3-year-olds were in this book, they would not be "SAME", they would be "DIFFERENT".

**Not pictured: Mercy Praise, nursery - she was enjoying her "sleep" unit.
Posted by Sarah at 3:02 PM No comments: