Why is the sidewalk blue? 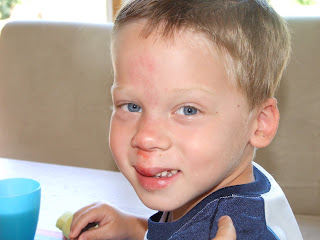 2 hours after taking a spill on his bike, Sam is smiling. Believe me when I say the picture doesn't do his injuries justice. His lips are both swollen - think Simpsons - and the skin under his nose is all scraped off. His front 2 teeth are a bit loose, and you know that little piece of skin that connects your upper lip to the top of your gums? Ripped right through that too.
At dinner tonight he shared another detail of his fall, telling us that after he fell, the sidewalk was all blue and when he got up to walk to mama, it was hard to see.
Yep, he was wearing a helmet.
He was on the sidewalk.
He did not hit anything.
He was, however, experimenting with turning the handles sharply first one way, then the other.
Yes, I was right behind him. Or pretty much.
There's all my disclaimers in case you were wondering.
Caleb was very helpful. Thankfully we were only about a block away from home. I stuffed some tissues in Sam's mouth and then had Caleb ride his bike all the way home and run back to help with Sam's bike - which he wasn't able to ride.
The boys had a relaxing late morning sitting in the shade and sucking on ice chips together.
And he says he wants a motorcycle!!

Poor Sam. Now I know why he got Tylenol. I would have needed a lot more than that!

at least he's still grinning!! Good chap. My brother has a motorcycle, and a broken arm. (Not from the bike.) He smiles a lot too.

You now must match the “point” earlier than you roll a seven to win. These are games to which Casino corporations can add value by way of optimization. It may be very unlikely that another game will problem Coin Master. Even Pet Master from the identical firm is far 온라인카지노 from a guaranteed success.