Wednesday morning came too soon after our late night on Tuesday, but look who's all smiles for breakfast! 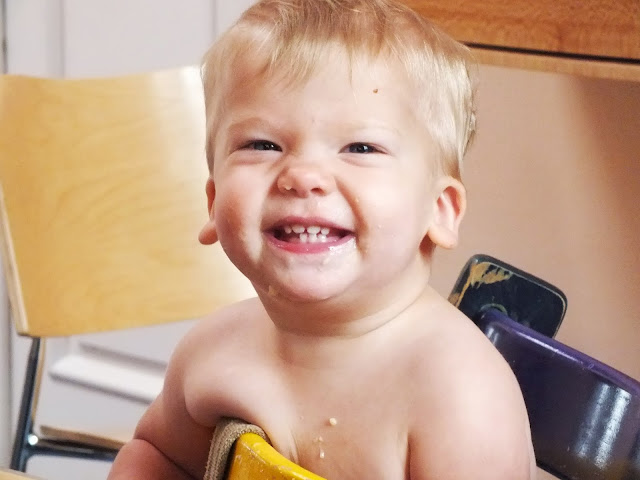 Today, we discussed how Esther and Mordecai and the Jews in Susa fasted for 3 days in preparation for Esther to go before King Xerxes.  Caleb is glad he doesn't have to fast for 3 hours, let alone 3 days. 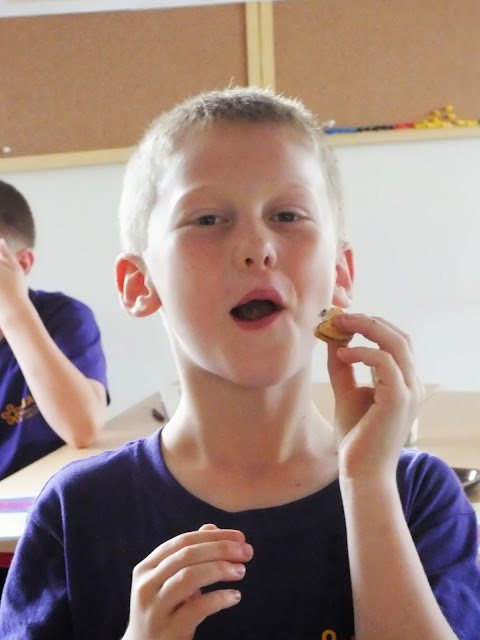 Mercy is making new friends each day as the kids get used to seeing her and having her there everyday.

Caleb stops a game of tag long enough for a quick photo. 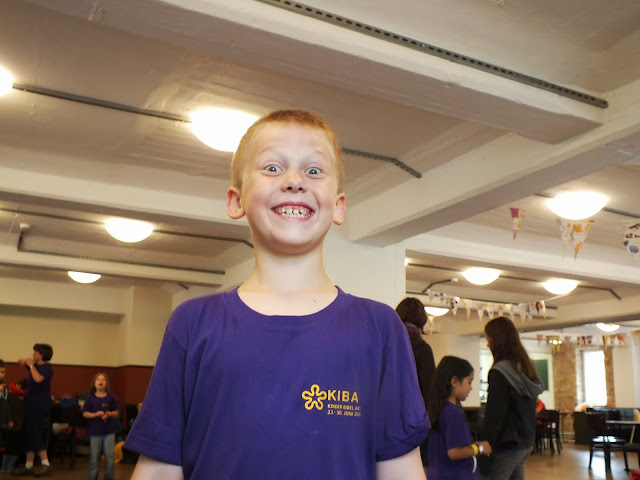 Mercy and an English-speaking friend. 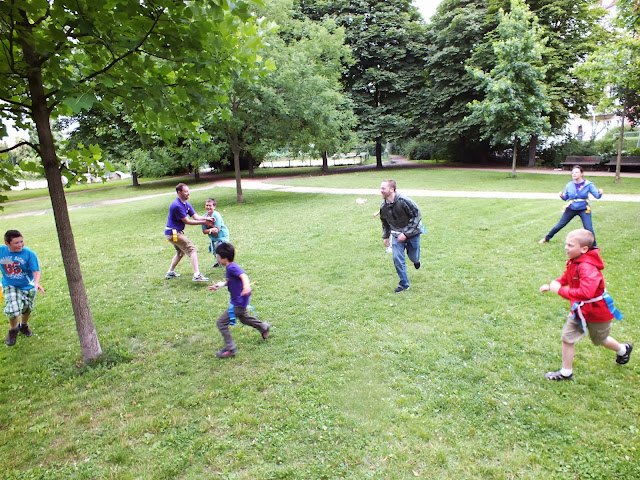 Caleb and Sam do have a clue of what is being said in German, thanks to Gloria, who's translating for them. 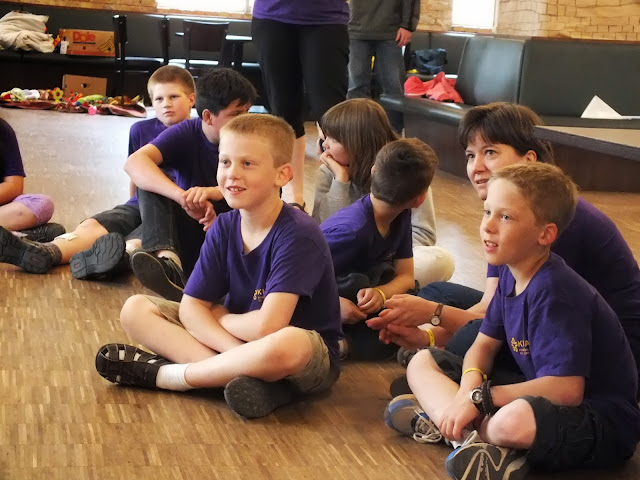 Brian and Sean have both really enjoyed the outside active time with the kids. 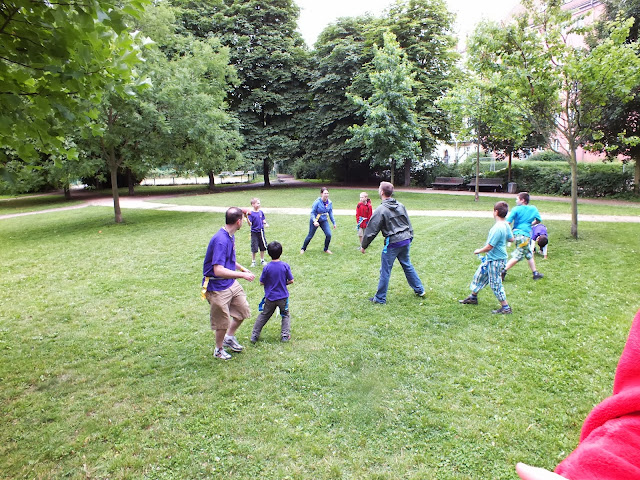 Minnesota night was an advertised community event mostly attended by people from the FeG Pankow church.  We (the Starkeys, us, and Gloria, our fellow Minnesotan) had prepared for this while still in the States.  We prepared or brought typical Minnesota treats - Beckie and I made 8 dozen chocolate chip cookies, there were mini Salted Nut Rolls, and Gloria had brought root beer flavoring to add to mineral water (there isn't root beer in Germany, just beer, which is much preferred) as well as makings for s'mores (not toasted marshmallows, just "raw").  We also provided lemonade.  There were about 20 people in attendance, including Dan, who's from Wisconsin (he's the one moving here with his wife and child in September).  We had a powerpoint presentation that included interesting (or so we hoped) information about our state, as well as pictures of our families in each season.  The presentation took about 45 minutes, then we had some time for questions.  We talked about everything from homeschooling to the Vietnam war.  See the older gentleman in the front?  He asked about the John F. Kennedy assassination and climate change, as well as Vietnam.

Other interesting questions:
"Do you need a special certificate to get hired by companies?"
"How many snow days do the kids get for school?"
"Does your state support Barack Obama?"
"Why do Americans like guns so much, and why would it be so hard to get rid of them?" 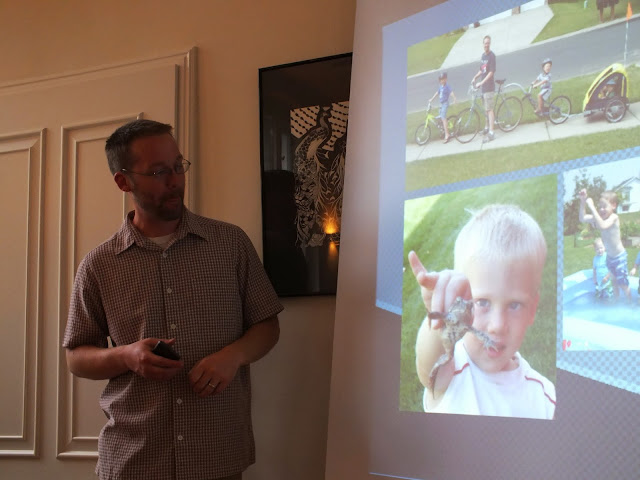 A cultural difference I've noticed is evidenced during team prayer time, which takes place back in the school kitchen both in the morning before KIBA starts, and after lunch before the afternoon programs start.  The prayers are all in German (Sean has prayed in English), and it's "popcorn style".  After every person prays, they say amen, and everyone else also says amen, but then the next person will jump right in and pray.  It sounds so much more engaged.  There is a designated closer, so you're not constantly looking up to see if the prayer time is ended.  Unless you're an American.
The group prays together twice a day - I love how one is right in the middle of the day - problems or concerns are able to be addressed and prayed for and everyone feels supported and heard.

Please pray:
I'm getting the feeling that quite a few of these children are unfamiliar with the God of the Bible.  Pray for dozens of tiny opportunities throughout the day and for eyes to see them and a willingness to open our hearts to theirs.

**URGENT!  So far, two of our kids (Sam and Jack) have experienced stomach issues.  As I am writing, it is Thursday evening, and Sam missed half of today at KIBA because he was up a few times last night and was pretty drained all day today.  Jack just woke up with it after being in bed for a couple of hours.  Pray for quick recovery and that it stops with them.  Thank you!