KIBA - Day 2
The second day had the advantage of being - well - not the first day, therefore, we'd been through the routine once already and knew what to expect.
One thing we didn't expect was the rain.  All day long.  There are about 40 kids enrolled in KIBA, of various ages, in what amounts to a pretty small space (any space can seem small with energetic kids and no capability to go outside).  So American football had to be rescheduled to the following day.  After the great success and fun of baseball the day before, this was a huge disappointment for the team.  On the upside, I, who had been feeling like I was just filling up space and not able to be very useful, was designated an hour of time right after lunch where I would be responsible for keeping the kids organized and coming up with creative games for them to play.
As you can see from our group picture, I was a bit sleepy, so any energy I would expend would need to be divinely given.

Here, Sam and Caleb are working on learning actions to one of our familiar German songs we worked on at home. 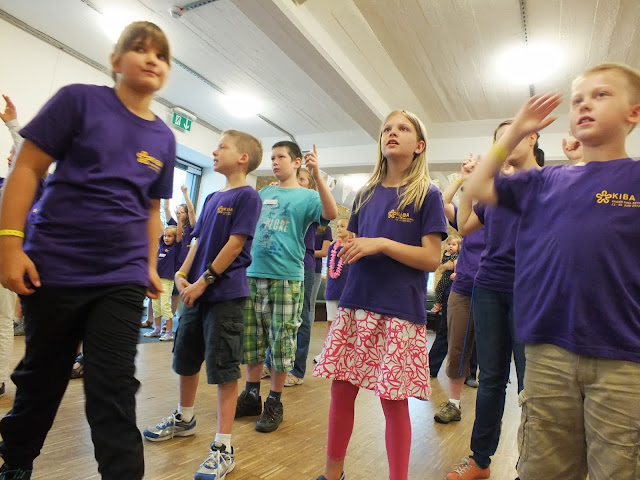 Caleb and Sam are blessed to have a wonderful translator sitting with them for most of their classroom time, so they're not totally lost on what is going on and are able to engage a bit. 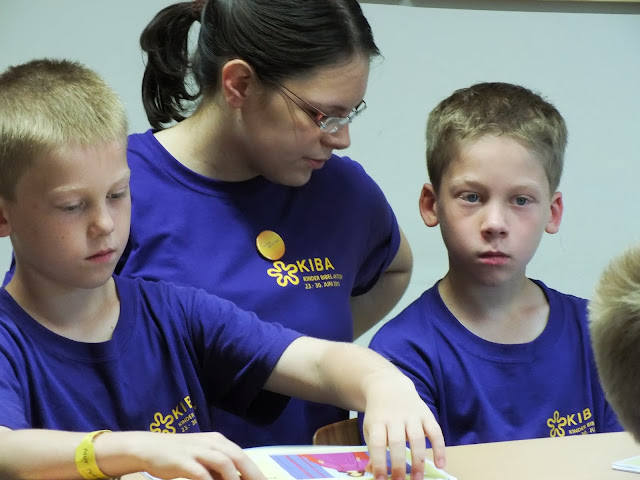 Classroom time is structured, with the story coming first, then a bit of coloring or workbook activity, a snack, and then small group time where they work on a special craft.  Here, you see Xerxes choosing Esther as his queen, just as God has chosen His bride, the Church.

An example of morning snacktime.  Something different here is that the adult helpers are not just permitted to partake, they are encouraged and expected to partake, even being served by other staff just as the children are.  Is this a sign that Germans are one step above Americans in terms of a child-centric society?  Anyway, I enjoy the snacks.  This is one custom I'd like to bring back with me!

Mid- morning, I brought Mercy down from the upstairs classroom where we'd been sitting and observing Sam and Caleb's class, to the main level - the cafeteria - where she was able to move around more and be a bit noisy.  Today, I decided she wouldn't wear her KIBA t-shirt, but she still fits in with her purple.  She has been so good with how much her schedule has been disrupted and how many hours of sleep she's short on. 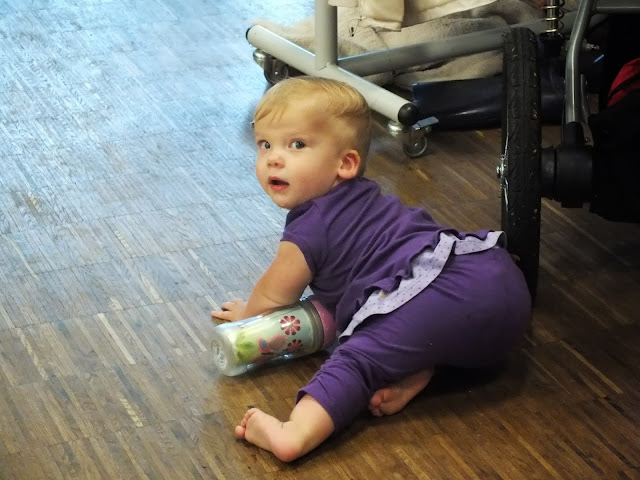 Right before lunch, Brian was in charge of games for the boys who didn't want to participate in the craft time.  Here, they're playing "7 up".  Or in this case, "2 up", which didn't work nearly as well, but they still had fun.

I believe this game was called "Duck and Fox" in German culture.  We know it as "Duck, duck, grey duck."
The boys enjoy anything that involves chasing each other.  Sam and Caleb have both learned that "Du bist!" is the German equivalent of "You're it!"

So here's the game time I was in charge of.  First of all, I can't do much without a translator, because when the kids hear me speaking English, the majority can't understand what I'm saying, so they just tune me out.  Different members of our team have had this problem as well.  It's very frustrating to be so completely ignored.  So I did have a translator (she's the one with the microphone).  She was also a very good leader (she's only 10), and quickly took control of the kids, explained more clearly than I could exactly how the game was going to go, and ran the entire hour.  I pretty much just sat and watched and provided ideas every once in awhile.

She's got their attention.

Here she's explaining the relay race and giving them encouragement and clarification as needed. 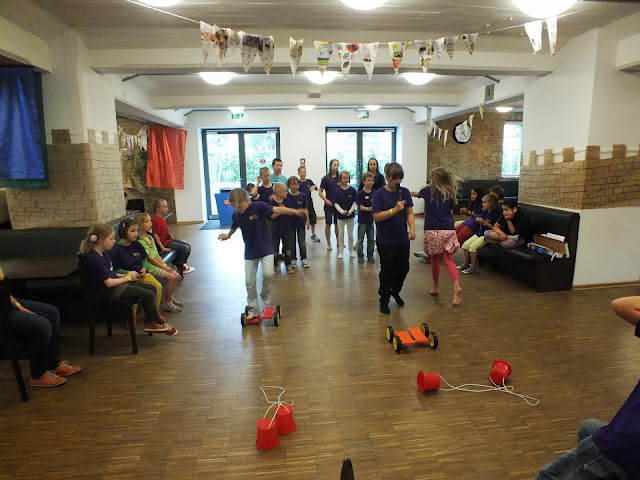 She came up with the idea for this game herself.  One day, she'll probably be running the entire program.

Here, I believe the kids are playing "circus", taking turns performing for each other on the stage.  Has it stopped raining yet?  Is the hour over yet? 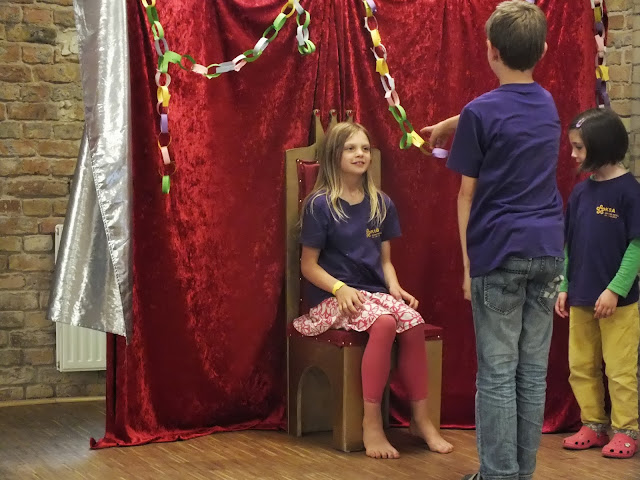 After our day at KIBA, we grabbed dinner (brats and hot dogs) on our way back to our apartment, and then hurried to prepare for our guests.  We hosted members of the Berlin city team, headed by Mike Edwards, met some new people, and heard about their ministries, their desire to minister, or their future plans in Berlin.  The best part of the night was that there was no translator needed - everyone spoke English!

This group of believers talked and shared with each other for over 3 hours.

I wanted to share with you too, since you were asked to pray, that Brian's sermon delivery went extremely well on Sunday!  Several people came up to him afterward and shared how their hearts had been touched by what was spoken.

Please pray for us as we are functioning on low energy, low sleep, and the realization that we need to keep on this way for a few more days.  Missing those we've left behind more and more as well.  Noah, Isaac, and Josiah, I'm so glad you get to spend this time on the farm with Grandma and Papa, but I can't wait to see you and give you lots of big hugs!