Today, we went for a walking tour of Pankow with Dave Lee and Gloria.  Gloria is the other KIBA team member who came from Minnesota - we'd met with her a few times back home.  She's worked with KIBA several times, so she's already fairly familiar with the area.

This is the local "community center" where we will be having our Minnesota night this coming Wednesday. 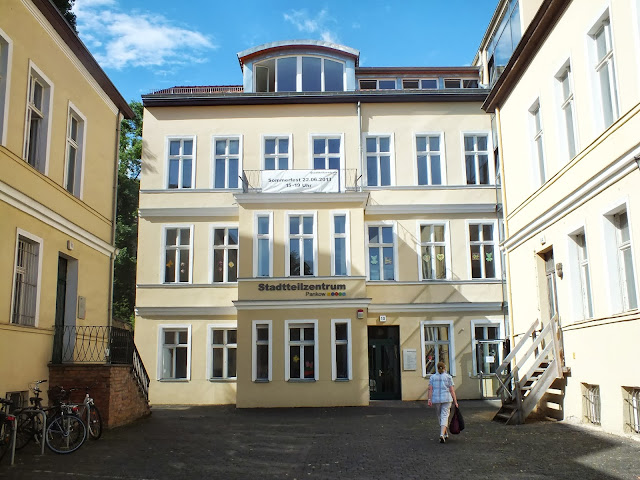 Here is the government center, or Rathaus in German. 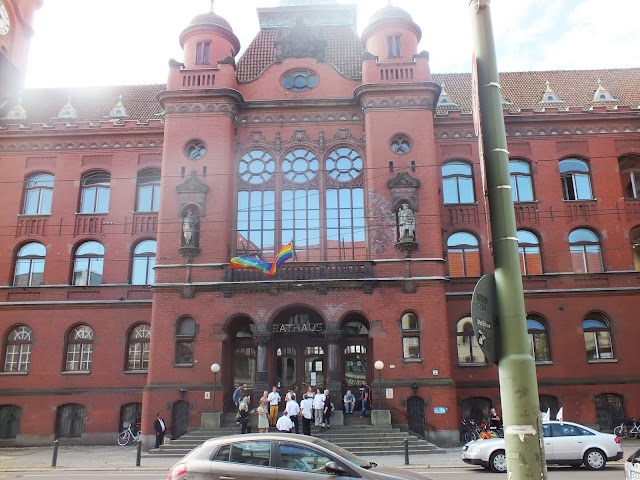 This is the building where KIBA will be taking place.  Not the entire building, obviously, just a few rooms on the first floor.

The boys are all excited to try some German "eiss", but so far it hasn't happened.  For real, anyway. 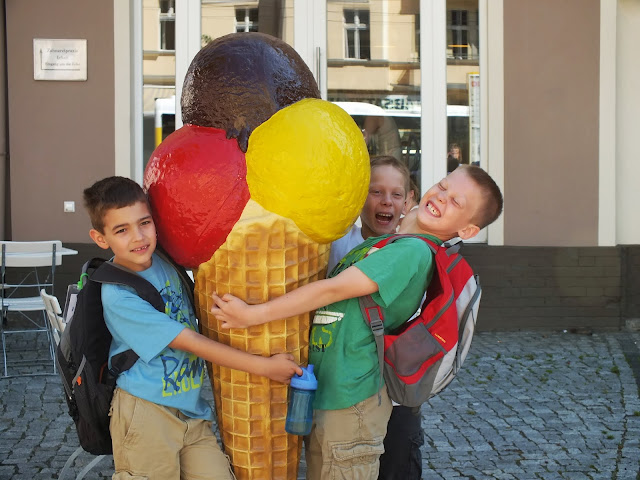 This was about all Mercy experienced of the walking tour.  She prefers to ride in her stroller.

After our tour of Pankow, we met another team member and her daughter, who will be attending KIBA, at a nearby park.  The boys got to try out some of their German, and I think they were reminded of how little they actually know, because Heidi is a talker!  Whether you can understand her or not.  Very friendly little girl. 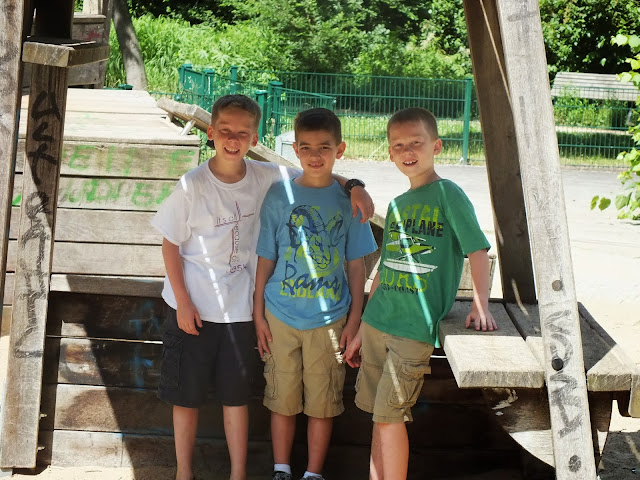 They had fun playing on some of the park equipment while the grown-ups visited. 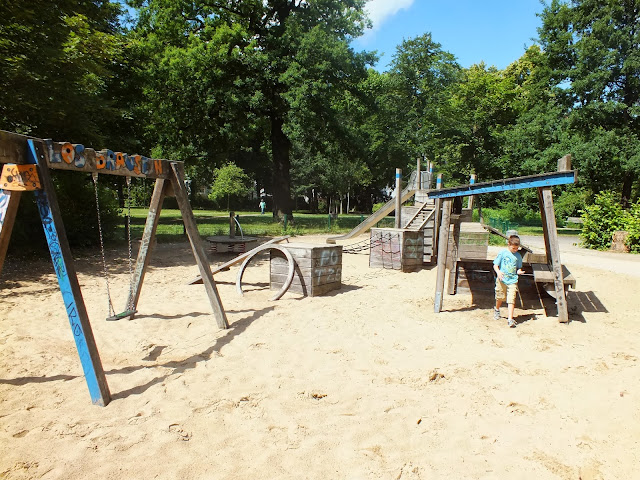 When the park got too hot, we walked over to the church office where Heidi taught the boys a board game.  She was also showing the boys certain items and repeating the German word for that item.  And showing off her own language skills by counting to ten in English.  The boys are happy to have started making friends, and from what I've observed, they will have no trouble in a classroom of German-speaking children all next week.  Somehow they muddle through and manage to understand each other just enough.  A good lesson for the adults. 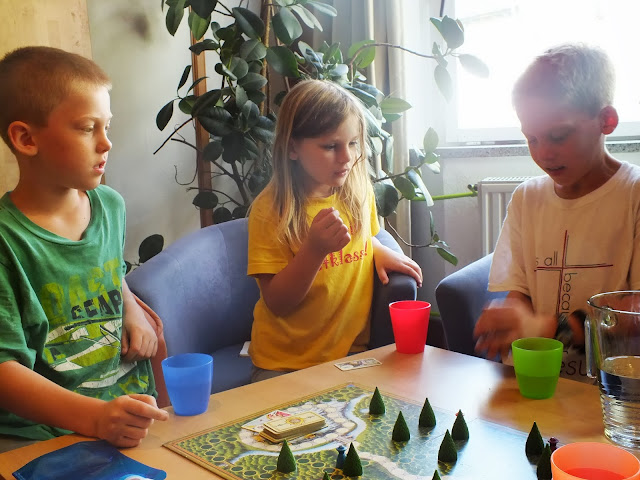 This evening, we attended a birthday party for two members of the Pankow church in a nearby park, which had a beautiful expanse of grass.  It was a nice, cool evening, and we enjoyed experiencing truly homemade German food.  And let me tell you, German potato salad made by a German is wonderful!  I've never had anything like it. 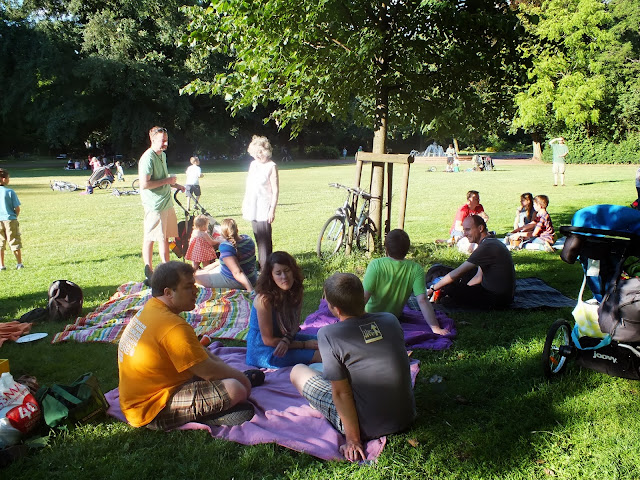 Mercy and Evie enjoyed watching all the activity. 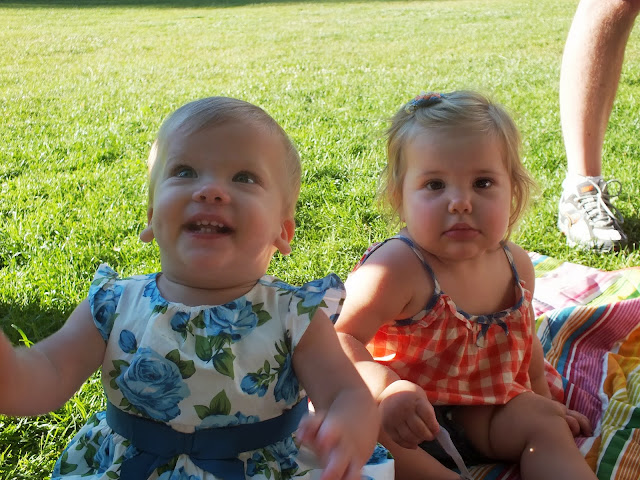 Sam and Caleb had brought a football that they were tossing around with a few other boys.  Somehow a few drinks managed to get spilled.
They also enjoyed kicking a soccer ball around with one of the other team members from the states, Dan.  He and his wife and baby will be moving to Berlin for a year this September. 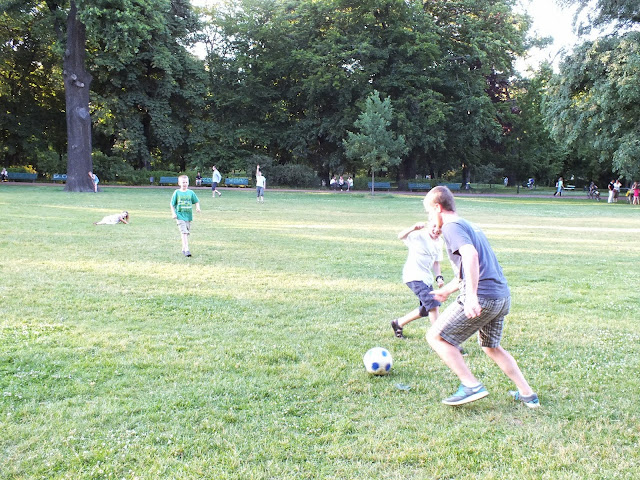 One of the best experiences of the day was meeting Marliss, an elderly lady who attends the church.  She was talking in fair English to us about how she'd been walking with the Lord for 48 years, her and her husband's very different experiences growing up (one of her husband's parents was a missionary, the other was a member of the S.S.).  She also told us about how desperately families especially needed to be connected to God again.  She called it a "spiritual desert", equivalent to a remote area of Africa.  She confirmed what we had already heard about this area of Berlin.  I was reminded of the Scripture, "Come to Macedonia and help us!"

*Caleb fell and in doing so managed to kill a fly, so he had a dead fly sticking to the back of his shirt.  Yes, this was a highlight.  At least for me!
*Meeting some children and seeing our own interacting with them freely and easily.
*Getting to learn and use the language more and more
*Having the experience of going grocery shopping, ordering meat and cheese from a deli, and trying to figure out which mustard or which butter or which yogurt to buy - trying to decipher enough of the German description to figure out what was in it!  Gloria was a huge, huge help with this. Beckie and I would have spent much more time there if she hadn't been with us.
*A cooler day today was so much better for morale.
*Talking about and getting more and more excited about working KIBA next week.
*Buying some wonderful fresh fruit from a stand.  I've never had such amazing apricots.

Looking forward to meeting more kingdom workers tomorrow and hearing about their vision for their work in Berlin!  Please pray for open hearts on the part of Brian and I and Sean and Beckie as we hear about these different ministries.

*Post title translation: "What is your name?"
Posted by Sarah at 8:00 PM